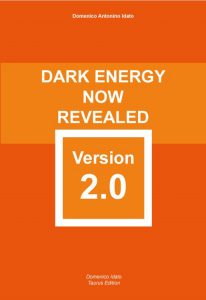 In 1998 I was still living in a foreign land when I matured the idea that the negative energy coming out, as a logical consequence, from the physical process of creation of time and space, it was the very same energy that Science and Scientists nowadays call dark energy.For those that time and space as products of nature have made their nose turn up, I am in good company. Have a look when and how close Einstein got in his book The principle of Relativity (1923 edition) where at page 106 he says and I quote: if we did not satisfy this condition, we would arrive at a definition of time by the application of which time would merge explicitly into the laws of nature, and this would certainly be unnatural and unpractical unquote. There you have it. A son of his own time. A man of science strongly conditioned by the intellectual influence of Immanuel Kant. As a matter of fact, there was no scholar in those days who did not have on his desk a copy of Kritik der reinen Vernunft. We all must agree that Kant with his Critique of Pure Reason did really have an enormous influence on the scientific and philosophical thinking of thewestern world. It was most unfortunate that all, and I am saying all, the forefathers of modern science drank avidly from that chalice.Back to our introduction, I shall say that I have now decided to present dark energy, in this short volume, the way I had seen it many years ago. I have further decided to couple it to a topic rather hot in itself too, that is: the surface of the universe.

This website uses cookies to improve your experience while you navigate through the website. Out of these, the cookies that are categorized as necessary are stored on your browser as they are essential for the working of basic functionalities of the website. We also use third-party cookies that help us analyze and understand how you use this website. These cookies will be stored in your browser only with your consent. You also have the option to opt-out of these cookies. But opting out of some of these cookies may affect your browsing experience.
Necessary Sempre abilitato

Performance cookies are used to understand and analyze the key performance indexes of the website which helps in delivering a better user experience for the visitors.

Analytical cookies are used to understand how visitors interact with the website. These cookies help provide information on metrics the number of visitors, bounce rate, traffic source, etc.

Advertisement cookies are used to provide visitors with relevant ads and marketing campaigns. These cookies track visitors across websites and collect information to provide customized ads.

Other uncategorized cookies are those that are being analyzed and have not been classified into a category as yet.